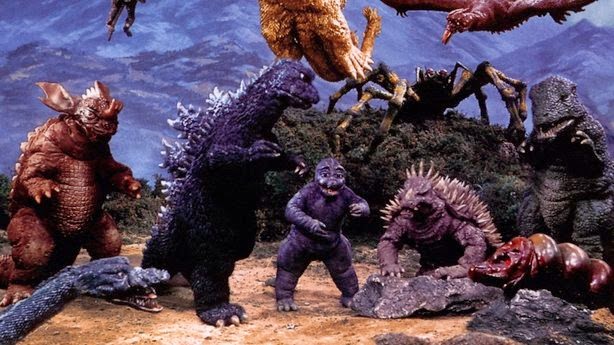 I saw Godzilla recently.  Dawn and I don’t go to movies often these days for a few reasons.  The cost, for one.  Then there’s the audience, which usually includes a number of people who seem to believe themselves to be alone in their living rooms.  And there’s also the fact that we’re just not that interested in the movies Hollywood is turning out lately.  But Godzilla was different.

I wonder how many hours of my childhood I spent watching kaiju destroy Japan and each other.  Japanese monster movies were common on TV back then, especially on the weekends.  On Sunday morning, there was Johnny Sokko and His Giant Robot, and every weekday afternoon there was Ultraman.  The 1960s and 1970s were a TV paradise for monster-lovin’ kids.

You might remember those two Japanese series, but I’ve found that they weren’t syndicated in all areas because I’ve met a number of people my age who have never heard of them.  Ultraman was my favorite.  The original series from 1966-67 took place in the 1990s, a decade during which, as we all know now, gigantic monsters and nefarious space aliens were relentlessly screwing with humanity, especially in Japan.  With that kind of kaiju fuckery going on all the time, you need a well-equipped team to deal with it, and in Ultraman, that was the United Nations Scientific Investigation Agency (although in the Japanese language version, it was the Science Special Search Party, or SSSP), but I remember the group being referred to simply as the Science Patrol.  My favorite quirk of the show was that the members of the Science Patrol frequently would be seen wandering through a field looking for a giant monster, but behaving as if they were looking for a lost contact lens, until one of them suddenly looked up, pointed dramatically, and shouted, “Look!  A monstah!”

Johnny Sokko and His Giant Robot was similar in that it featured an organization that protected earth from annoying aliens and giant monsters, mechanical or living.  In the series, Earth is under constant threat by the Gargoyle Gang, led by the vaguely Cthulhu-like Emperor Guillotine, who issues commands from his undersea fortress.  They are constantly battling the force for good in this series, which is the organization known as Unicorn.  Johnny Sokko is a little boy who, through a series of outlandish events, winds up in control of a giant robot.  Johnny and his robot go to work for Unicorn, and lots of action and adventure result.

Both shows were primo entertainment for kids because they worked on kid logic.  They were brilliantly designed to appeal to children.  The daikaiju feature films had bigger budgets, though, and were the precursor to these television series.  But all of this really came from the fertile imagination of a man named Eiji Tsuburaya, who virtually invented the kaiju genre and, for decades, single-handedly protected earth from nasty aliens and giant monsters.  Tsuburaya was the special effects wizard behind Godzilla, Ultraman, and a host of giant monsters.  He was the godfather of kaiju.

I’d made my way through several Godzilla movies before I finally saw the U.S. cut of the 1954 original starring Perry Mason.  (Yes, I know it was Raymond Burr, but I’m sorry, back then, Raymond Burr in black-and-white had no other identity for me than Perry Mason.)  I had seen Godzilla only in color, and usually fighting with other monsters, so the grim black-and-white movie kind of caught me off guard.  I didn’t care for it.  The movie was uneven, choppy, and Perry Mason kept popping up to pontificate, which I found annoying, and it threw the whole thing off for me.  Years later, I saw the original Japanese cut (under the title GOJIRA) and thought it was a much better movie than the American release.  In that movie, of course, Godzilla was a metaphor for the nuclear nightmare that fell on Japan only ten years earlier.  I was a little kid.  Metaphors didn’t interest me.  Monster fights did.

I recognized that the movies were terribly silly and I enjoyed mocking the laughable English dubbing.  But there were so many things to love about them that it didn’t matter how bad they were.

When I watch them now, they look to me like some weird branch of professional wrestling, like the unholy offspring of the WWE and GWAR sent back to the ‘60s in a time machine.  The Japanese monster movies I saw most often when I was a kid were essentially professional-wrestling-style matches between guys in rubber suits on miniature sets with explosions and fire, hilarious English dubbing, and music that was overwrought, comical, or both.  But if you look a little closer, there’s a lot to admire.

I was crazy for puppets and puppetry when I was a kid and I think that had something to do with my attraction to those films, because there’s a lot of puppetry going on in most of them (something I recognized even as a small boy, so they weren’t terribly convincing — but no less engrossing).  There’s also a lot of artistry in the miniatures and cinematography, and in those imaginative monsters themselves, the rubber suits that became so colossal and fearsome with some sound effects, music, and a little visual tampering.  The visuals did not fool me for a second — I don’t think they fooled anyone — but that makes it all the more significant that I was mesmerized by them.  Young people watching those movies today probably would laugh their asses off at the effects.  But they would do so having no clue whatsoever as to how powerful and consuming those movies and TV series were to children forty years ago.

The thing I remember most vividly about them is that they fired up my imagination like nothing else.  They started the gears and cogs of my creativity turning when I was a boy.  In fact, they were so stimulating that, while watching them, I was usually drawing or writing.  They MADE me create.

Some were better than others, and some were absolute dreck, but even the bad ones had their charm.  I didn’t watch them for the drama or suspense because there really wasn’t any, and certainly not for the stories because who knew what those people on the screen were actually saying under all that dubbing?  I watched for the special effects.  Even back then, these were not state-of-the-art effects.  They were guys in rubber suits.  But somehow ... it all worked.  They suggested ... and we imagined the rest.

Even when I was laughing at them, mocking them, it didn’t take long for me to fall into those movies like Alice falling down the rabbit hole.  They created a goofy world that somehow made sense to a kid, and they were a hell of a lot of fun.  My dad, who responded to my taste in television viewing with derisive snorts and sneers, thought Japanese monster movies were absolutely the dumbest things EVER.  And yet, even he would fall down that hole with me and get involved if he was in the room when one was on TV.

I was especially fond of the movies that starred a whole cast of monsters, like Destroy All Monsters or Godzilla on Monster Island.  They were monster free-for-alls.  Ghidorah was a big favorite of mine because whenever he was in a movie, a buttload of monsters joined him.  And he had three heads on long snake-like necks — how fucking cool is THAT?

One of my favorites that did not include Godzilla was War of the Gargantuas.  I was fascinated by the tale of two giant, hairy monsters, the brown one docile and friendly, the green one violent and dangerous.  I haven’t seen that movie in about forty years, and I prefer it that way.  I’m sure I wouldn’t like it now, and I prefer to remember it as the movie I loved as a boy.  Decades later, I was shocked to learn that the movie was originally shot as a sequel to Frankenstein Conquers the World ... which is probably my LEAST favorite daikaiju movie.

A giant Frankenstein monster?  Really?  It seems like a bad idea now, but when I was nine ... it still seemed like a bad idea.  It conjured mental images of a colossal Boris Karloff in his Frank Pierce makeup bellowing “Fire bad!” as the oil refinery he just stepped on bursts into flaming explosions.  I still wince at the notion of combining Mary Shelly’s monster with guys in rubber suits and miniature sets, but I’ve met plenty of people who hold that as their favorite daikaiju (giant Japanese monster movie).  It just didn’t work for me.  Except as comedy.  But did I watch?  Are you out of your mind, of course I watched!

I have a difficult time making it all the way through one of those movies now.  That’s okay because they weren’t made for 51-year-old men, they were made for kids.  But after all that time spent in that goofy world, how could I not give the new Godzilla the full treatment by seeing it as it was meant to be seen — on the big screen in 3D?

I was kind of excited about seeing the Big Guy on the big screen for the first time, but I have to admit my expectations weren’t very high.  They were, however, significantly surpassed.  It was much better than Roland Emmerich’s 1998 movie in which an iguanadon, or whatever the hell it was, was foisted onto the public as Godzilla in an unfunny hoax that was appreciated by no one I know.

2014's Godzilla shows some respect and affection for the monster’s tradition.  It went to some lengths to include engrossing human interaction (although, to be honest, I think it could have tried a little harder, but that's just me being picky).  There are no guys in rubber suits, of course, because this is the digital age in which all special effects are small enough to be accomplished in a little computer.  I prefer the days when they were actually done in front of the camera by creative people who had to fold, spindle, or mutilate their imaginations to realize their vision.  But those in charge of the digital effects for Godzilla were fond enough of the monster’s history to give that CGI beast a look that suggested a guy in a rubber suit.  I cannot tell you how much I appreciated that little bone thrown to th
ose of us who grew up with the monster.  It was a big-budget blockbuster movie with familiar modern-day stars, but it managed to conjure the spirit of the daikaiju of my childhood.

Come on, admit it.  We need our giant monsters!  They’re far more threatening than terrorists, they’re much scarier than natural disasters ... but they’re not real.  They exist only in our imaginations ... like Santa Clause, the Easter Bunny, and the invisible friends of our childhood.  We need those monsters, no matter what shape they take — on the screen or just in our heads — like we needed those childhood imaginary friends.  They help us to deal with life’s ugliness — the school shootings, the unemployment rate (the real one, not the one the government is reporting), and the enormous surplus of hatred and vitriol that exists in this country (and on our planet in general).